DANNS IN THE TOWN OF UNON

This section of the family website outlines the people and places in the town of Union, Tioga County Pennsylvania in the mid 1800s. The Philip Dann family homesteaded here in 1840 and "our" line of the Danns and Van Hoesens were gone by the mid- 1860s. Other branches of the family also moved here, and many descendants of all branches remained, some to the present day.
The story follows... 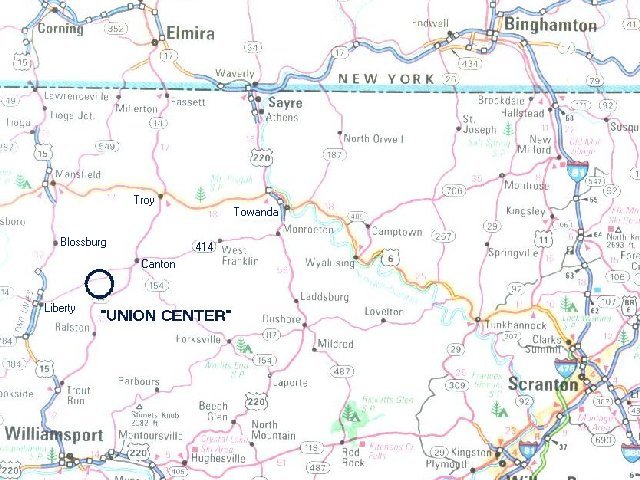 This is a fairly current road map excerpt of Pennsylvania, showing the Town of Union in relation to Elmira, Binghampton, Scranton, and Williamsport.
Pennsylvania route 414 cuts across it.
HOW DID WE GET HERE?

The following narration is excerpted from one of Rhoda English Ladd's "Journey to the Day Before Yesterday" local history columns. It relates a story told by Polly Dann Harrington, a much- older sister of "our" A.J. Dann:

"...In 1838 we moved from Luzerne County PA (northwest of Wilkes- Barre) to Pike Township in Bradford County PA. We rented a farm and lived there a year. The following year we rented a farm in Warren Township, lived there a year, then started with hired teams and one horse of our own to Troy, Bradford County. We drove two cows and had a sick horse and several mishaps along the way. The journey took three days over rough roads and in sparsely settled country.

In the fall of 1840, Father and brother Alpheus went on the way to Union Township in Tioga county, took up a homestead and chopped a fallow [a clearing]. In the spring of 1841 we started for our new home with two cows and two hogs and our horse. Much of this journey was through the woods.

Upon arriving at or near our new home we moved in with a family and lived eight of us in one room for three weeks until our men folks, with the aid of the few inhabitants could put us up a log house. At this time in Union there were almost no roads, no schools, and very few settlers. Three years after our arrival the settlers got together and built a log school house, and then we had the priveledge of going to school. 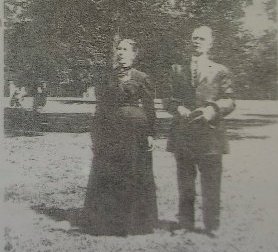 Polly Dann Harrington, probably with ther brother A.J.
She apparently was the genealogist of her generation... I bet she would have fascinating stories to tell us!
UNION TOWNSHIP IN 1840
The following information is copied from the "History of the Town of Union, 1883", printed by the town historical society:
.

..."Settlers, however, came slowly. Of the hardships incident to the settlement of a new country only those who have experienced them can form any idea. Union was a township heavily timbered, and until about 1854 when the Elmira and Williamsport Railroad was under construction, there was no market for the timber and lumber, and most of it had to be burned upon the ground where it was felled. It required courage, health, and an inflexible will to clear up and bring under cultivation such a township as this.

A few of the early settlers were native Pennsylvanians, but a large portion of them were from Washington and Delaware Counties in New York; and another portion who settled in the northern and western portions of the township were sons of the Emerald Isle. From the very earliest period of the settlement, there was always the best of feelings existing among the early settlers; as an old pioneer expressed it "We were like a band of brothers".The name of the township was Union and the early settlers possessed that sentiment in an emminent degree. From a few sturdy pioneers and a half- century ago, has grown up a community of intelligent, industrious, and respectable people, now numbering nearly two thousand inhabitants, owning property assessed at $215,696. In 1883 there were twelve schoolhouses, three churches, comfortable dwellings, good barns, and all the improved agricultural implements necessary to cultivate the soil and gather the harvest.

It was only concert of action that the pioneers were enabled to clear up farms, erect dwellings and barns, build churches and schoolhouses, and provide themselves with the comforts of life. "Logging bees" as they were termed, were frequent in the early settlement of the township. A settler would chop a 'fallow', pile the brush in heaps and at a suitable time set them on fire, thus burning all but the trunks of the trees. After the burning of the brush, the tree trunks would be cut into suitable lengths for "logging". This work completed, the settler called upon his neighbor for helpp in drawing the logs together and rollong them up into huge piles for burning. Here was where the spirit of true neighborly friendship was manifested. Messages were sent to all settlers for miles around,notifying them that on a certain day "Mr. *" would have a logging bee. The work generally began immediately after dinner. Every ox team in the neighborhood was called into action. There were always selected from the company, the "hitchers", and the "rollers", the drivers, and those to attend to the skeds. A dozen gangs perhaps would thus be distributed over the fallow, all striving to do the most work in the allotted time.

Although the men were generally temperate, even to abstinence, yet upon such occasions an old and trusty man would be selected to pass around the "jug" of the best rye whiskey while a boy would accompany him with a pail of water and a dipper. The whiskey would be dealt out with a cautious hand. It was a rare case when any one drank to excess; they took just enough to brace their nerves and quench their thirst. Thus the work,by the time the sun had set behiid the Liberty hills five, six, and even ten acres would be "logged up" and ready for burning.

In the twilight, a long table was set in the open air loaded with substantial food for the loggers. The settler had made arrangements for the occasion by killing a sheep or two, and from the steaming pot, hung either in the fashioned chimney or in an improvised fireplace in the open air, the good wife and her assistants would deal out a most sumptuous pot- pie good for a king.

The supper being over the guests departed for their homes, some of them miles away. It was thus that the Union spirit manifested itself, at logging bees, "raisings", or any like work where the settler was unable to perform the labor himself. One old settler informs us that he has attended some forty such bees in one year, spring and fall. All honor to those who have thus contributed to the present prosperity of the townshipand made it one of the most productive in the country.

We must not forget to give the wives and the older daughters the credit which belongs to them for the part they played in pioneer life. In addition household duties, which were many and arduous, they frequently assisted in the rugged work of the field. They were frequently engaged in planting corn or potatoes and working the hay and harvest fields.

Perhaps the wife had left at the house an infant in the cradle with a small child to watch it, while she and the older daughters were assisting in the work of men in the meadow or grain field; after toiling in the sun for hours, would an hour before meal time, go to the house and prepare over a blazing fire the meal, thus bearing a double care and burden.

In the early days of Union, the facilities for cooking were not as good as now. Then the huge fireplace, with its iron crane and trammel hooks swinging over the fire was in use, and none of the improved cooking stoves and ranges with hot water reservoirs pastry ovens, and all other modern appliances were thought of. The ovens were then made of sheetiron, with tin reflectors, and placed before the fire; or consisted of large round cast- iron bake- kettles with covers which could be put into the fire and covered with coals and ashes. Yet with the crude utensils then at hand they managed to cook a savory as well as wholesome meal and set it before the family.

The Philip Dann 1841 homestead:
The Philip Dann homestead site is not near any present- day roads, and lies at the northeast corner of Erwin and Diane Spencer's farm. Diane always keeps an eye and an ear open for the past; her interest in local hstory is exceeded only by a respect and admiration for those who stewarded her lands before her. Much of our Town of Union information comes from her.

Diane showed me the remnants of a wide path which leads to Philip's cabin site from the south, and says "this was how they came in" to their homestead site. In flying over this area of Union, I noticed that the eastern edge of the farm lines up with two different hedgerows in the distant north. It may well be that access to the homestead was by way of a recently- blazed survey line, something that would have looked a lot like a "road" in an otherwise dense forest.

She took me to the site which has always been described as Philip's original cabin, and it looks like any other part of any other cornfield that one might view. It was hard to contemplate that this was the spot where Philip finally found home, and where A.J. and most of his siblings were born or spent their formative years. The fact that it was once the site of a cabin is substantiated by the debris that has "always" been turned up by the plows. While I walked around taking pictures, she had no trouble finding several shards of glazed kitchenware. 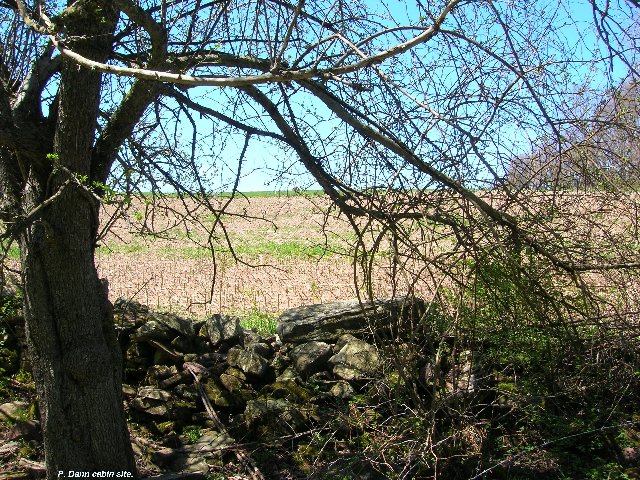 Philip's cabin site lies in the cornfield in the background of this photo, pretty much at the grassy spot in the center of the picture. Yes, I took some license with this photograph, stepping onto the other side of the stone fence which marked the property line, and framing the site with an old apple tree.
CLICK ANY OF THE BOXES BELOW FOR MORE INFORMATION