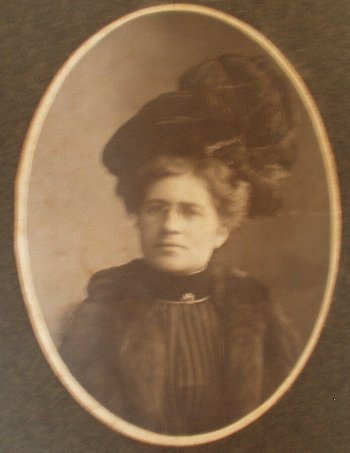 Edith married Levi Root, a former Elmiran, and they lived in Canton PA where they ran a hardware store. They had no children, so there is little information to pass on about them.

The picture of Edith above was received from the Scudder family through Jack Sullivan, and had the following inscription on the back, indicating that his aunt Edith was named after Edith Dann Root, born a generation earlier and a cousin of her mother. 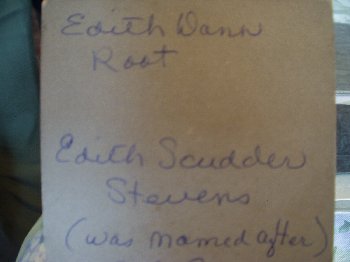 It appears that Levi and Edith were a "favorite aunt and uncle" to their sibling's children... a fairly large group, and she remembered each of them in her will with various possessions. According to Angeline Wickham, Levi used to come to the farms to hunt, and stayed with the Wickhams when he did.

May 2010: Dotte Hayes wrote me, correcting a statement that was on this page..."My father (Her father was Clarence Hayes, son of Cora Dann and Daniel Hayes) NEVER "stayed" with Levi & Edith. He was much closer to his Uncle Alph, who was a doctor in Canton, and he did live with him for months. Unfortunately weĺve been unable to document dates, other than it was when Innes was a small child. The date stamped on the pertinent postcard is not legible.

Dotte continued with several more paragraphs of interesting tidbits. They defy paraphrasing, so I present them verbatum: Dad had emphysema in his elderly years, and apparently was recovering from pneumonia at time married. My reasoning: as a child, he may have had respiratory problems that were aggravated by environment on the farm (the kids had to help with farm work!), thus Cora probably sent him to stay with Uncle Alph ("Uncle Alph" was Dr. Alpheus Dann, brother of Cora Dann Hayes, and brother of Edith Dann Root) for ôobservationö and medical recommendations. Jean and I knew and even my cousin Doris recalls hearing that Dad spent time in Canton with Uncle Alph.

I recall Uncle Alph coming to a family picnic in Havana Glen back when I was a child. Probably was with Cora, some of her children and grandchildren. Am sure NOT a large reunion as we now plan. Remains in my memory because he brought a big watermelon and his chauffeur drove him ľ both were unusual to farm kids during THE DEPRESSION. I donĺt think that he drove very much, had a chauffeur drive him. And I doubt that Aunt Edna ever knew how to drive a car.

My parents used to go to Canton to visit with Uncle Alph. I remember being there as a child and when in teens. His wife was different than other women we knew. After both Dad & Alph were retired and had more free time, they went down more often. Uncle Alph left his 1960s Lincoln Continental car to Dad, after his death, with the understanding that Aunt Edna would have use of it during her lifetime. Dad was very proud of that car [he liked cars, not horses as his father did!] He drove it until fall of 1977 when his health (back and legs) made it necessary for him to stop driving.

From Grandfather Hayesĺ cashbooks (farm with some family expenses) I discovered an entry, ô$s -- Levi for Clarenceĺs carö. Thus I assumed Dad purchased a car from Levi -- perhaps Levi sold cars + his hardware business, or perhaps Dad bought Leviĺs old car when he bought a new car. However, after learning more about Leviĺs financial help to others, concluded that he had loaned Dad the money to buy his first car. [Levi did, in fact, sell new cars in the early years of the auto industry, selling "Wyllis Knight and Overland cars"]

Too bad that we did not start researching the older generation while Dorothy [Bullock] & Gladys [Chatterton] alive (and alert) because living in Canton, Iĺm sure they really knew both uncles and could have provided much information for family history.

Thank you for digging out this info and posting it. Am sure Edith & Levi were not ôunknownsö as Jeriĺs booklet and website had implied, but very nice people interested in and generous to their nieces and nephews.

Jim Dann states that his father Stanley received a loan from Levi for the purchase of his Ridge Road farm. 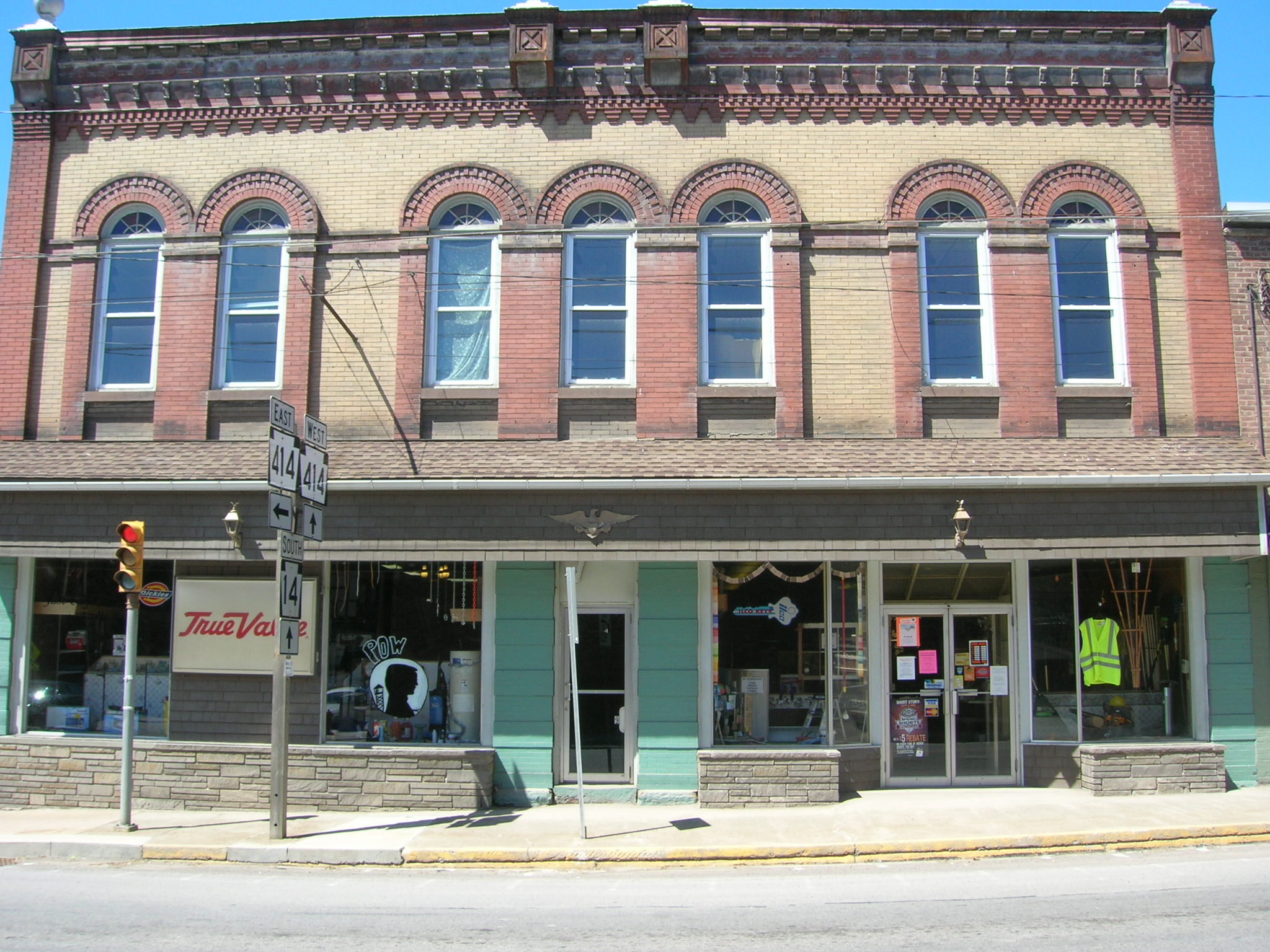 Levi's store front, taken 2010. The hardware store was on the right side, and there was a grocery store on the left side. This building faces east, looking down the square in Canton.
It is still a family hardware and occupies the entire building. The two photographs posted below hang behind the checkout counter, and the owners graciously allowed me to copy them.

A photo taken inside the store, March 1909

A close- up of the two people in the picture above. Levi would have been about 30 in 1907, and the man in the picture seems about that age. The woman has a resemblance to the picture of Edith, at the top of the page. 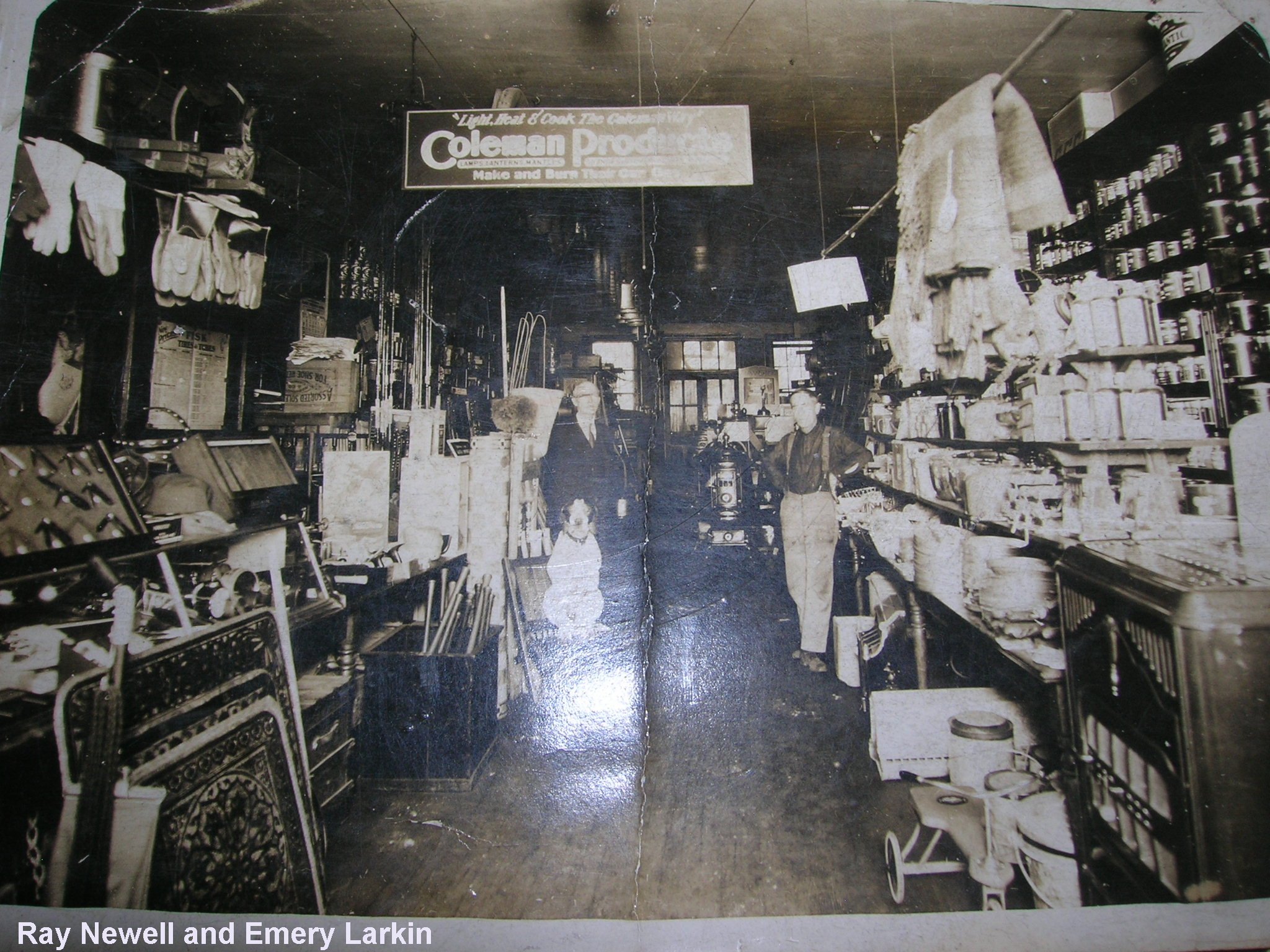 Another photo, probably the late 40s. The two men are identified as Ray Newell and Emery Larkin. Ray Newell was Levi's partner

A notice in the Canton newspaper...

Edith and Levi share a burial plot in Elmira's Woodlawn Cemetery with her parents, Andrew and Angeline.

E- mail Bob Tilden (rdtilden@yahoo.com) if you have information or photos!