little pictures of times gone by

NOTICE:
Portraits and snapshots are slowly being transferred to their "families"... For example, photos of A.J. and Angeline will be found in the A.J. Dann file. 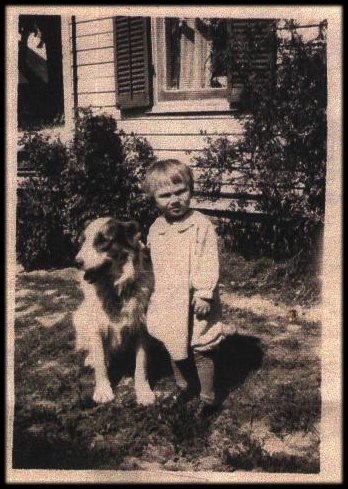 Jim Dann and his dog Ted. This is about the time that the two of them set out on their first (of many) adventures. The whole hillside went looking for them, and they were eventually found when Wayne Mack (Roy Chappell's adopted son) found them when he went to get the cows. During their two- mile trek, they had walked through a bee's nest... 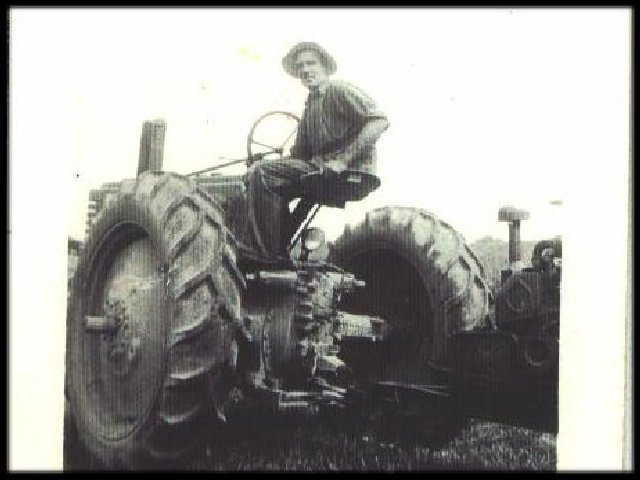 Laurance on a tractor 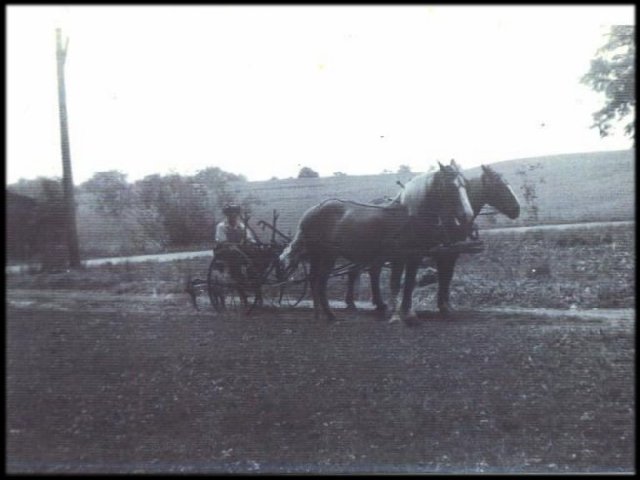 Laurance on a cultivator. Jim said that Laurance could cultivate all day without falling asleep, a talent not widely held.

The horse in the foreground is "Belle". The picture was taken just up the laneway from the Westlake farm, and the Middle Road is in the background. Just to the left of the picture was an old barn, and to the right was one of Julia's two gardens. 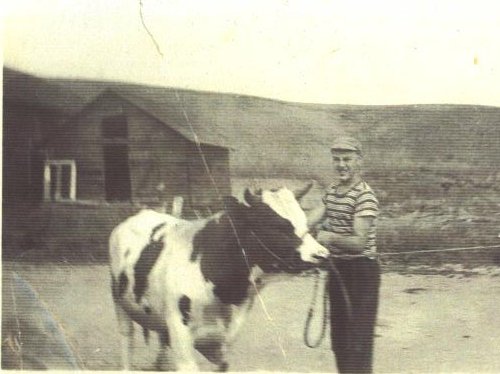 This is Delos Dann with the bull named Glen Pinowatchie" The background is the interesting part though. The building at the rear is his ice house, which stood next to the large shed (just visible to the left) that still stands on the property. Compare the bare hillside to today's picture, below: 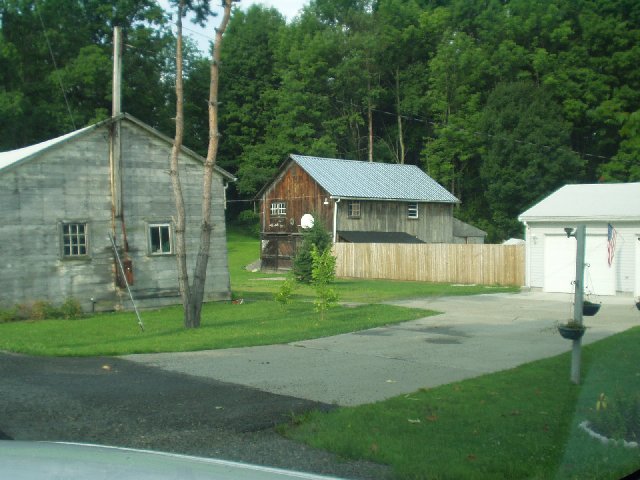 The hillside behind the house and barns was reforested by Ralph and Delos as a 4-H project.

An anecdote that I cannot attach to any of these pictures is one about "Grandpa Sam Westlake, Julia's father. He got a new car and parked it in the shed... (I don't know if "garage" was a proper farm word yet). Sometime later, Sam got crossed up with the controls of the car and drove it out through the back of the shed. He never drove a car again, and Julia did the car driving after that.

Yet another picture of Laurance's farm, below. This one is taken from a mid- fifties Christmas Card. It shows the layout of the farm, (north is upper left) and trees starting to grow on the hillside. 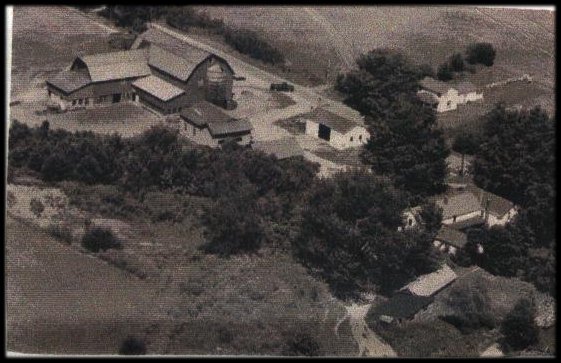 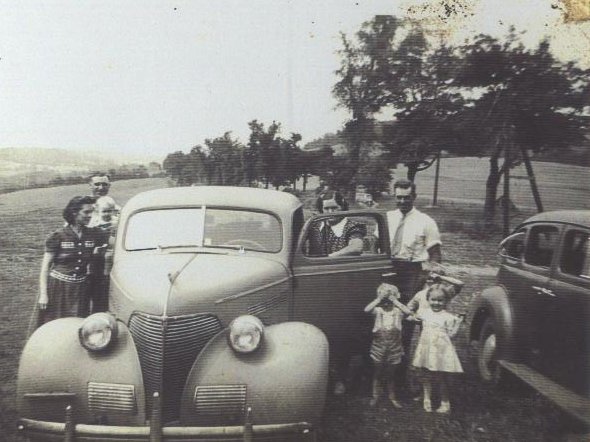 Donald and Gerald and families, taken on the "Worden Farm" which Gerald was operating at the time. Gerald and Marion with Phil are on the left and Donald, Francis and family are on the right. The car appears to eb a late 30s Pontiac. 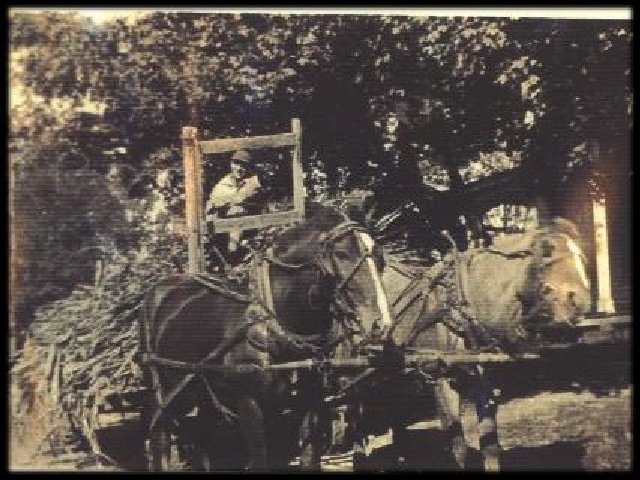 I was told that this is Gerald is on the wagon, but there is lots of room for doubt. The picture is not quite clear, and nobody recognizes eiter the wagon or the horses. The wagon is carrying cut corn which is being hauled to the silage cutter box at the silo. At harvest time there would often be 5 different teams, wagons, and neighbors, all working together. 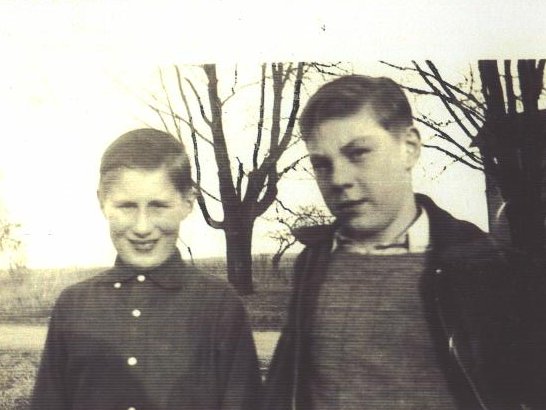 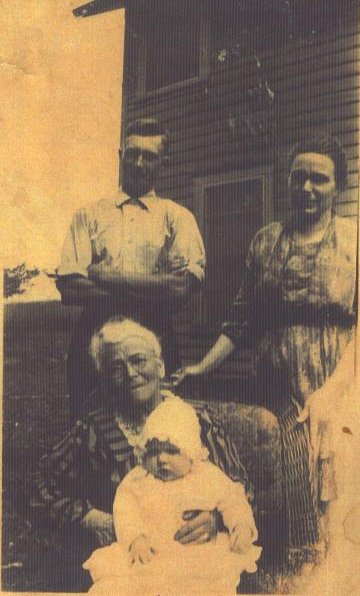 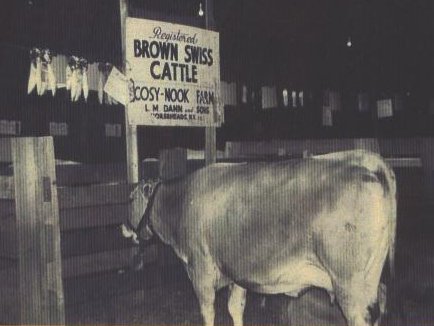 One of Laurance's brown swiss. This was his specialty in later years, and he was proud of them. Dotte adds: Laurance had registered Holsteins when he started farming in the 1920s and into the 1940s at least. My brother had a calf from Laurance's herd for 4-H project. When Laurance had Holsteins, he used Dannroving for the herd prefix. Name passed down thru generations (including "Danny" Dann) and today is used by Delos' son and grandsons in Canada. That name is part of the Dann family history!!! 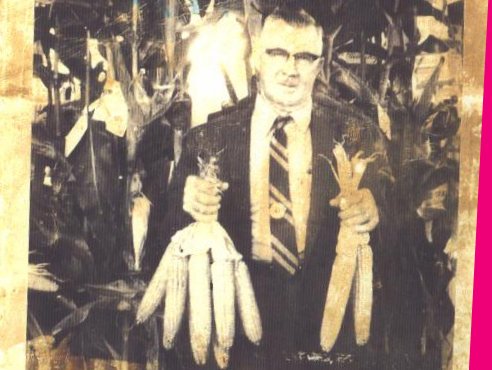 Laurance in front of a stand of corn, and some sample ears. He was proud of these too. 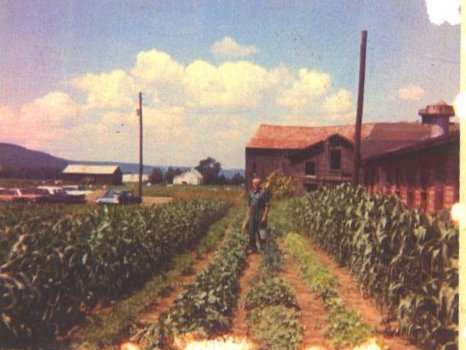 Laurance in his garden after he moved off of the Ridge. This was behind Horton's Landscaping. 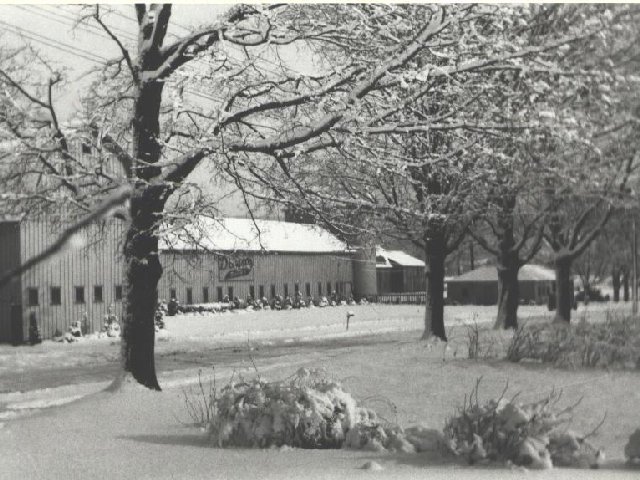 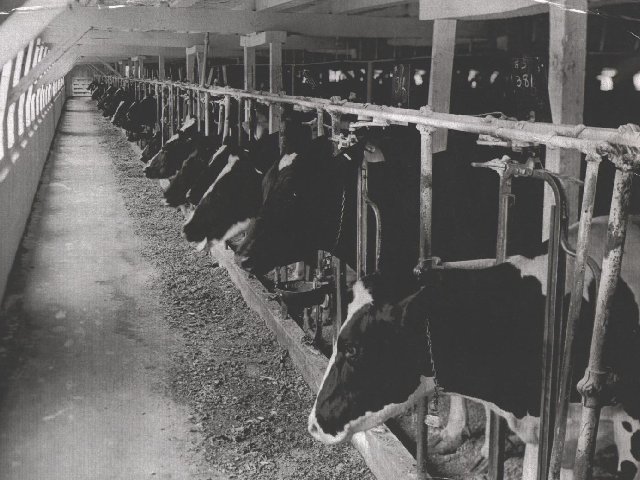 Inside Bob Dann's main barn, which burned in 1957. 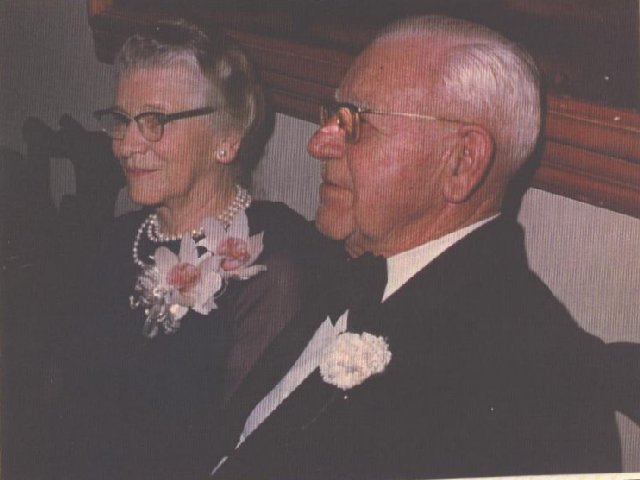 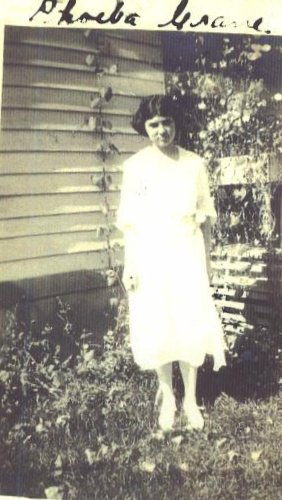 Phoebe Crane, before she married Stanley. 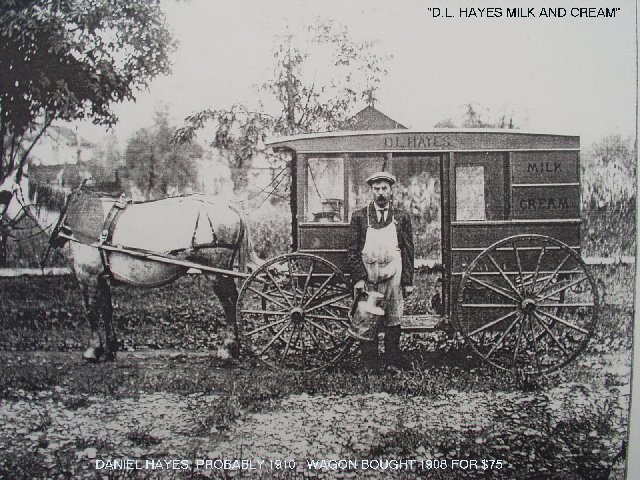 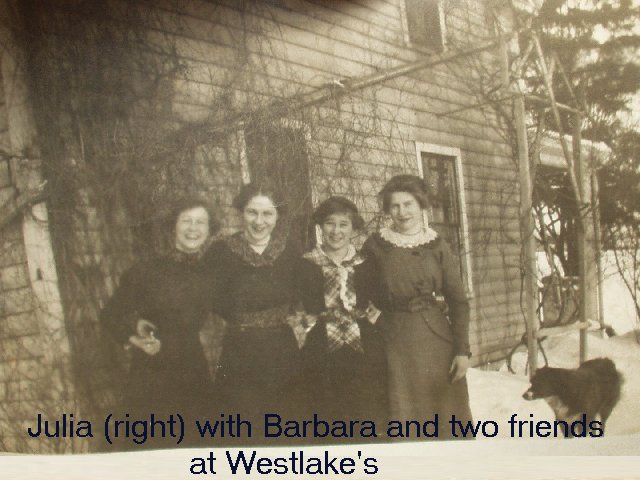 Julia Westlake at right, with sister Barbara and two friends, at Westlake's. 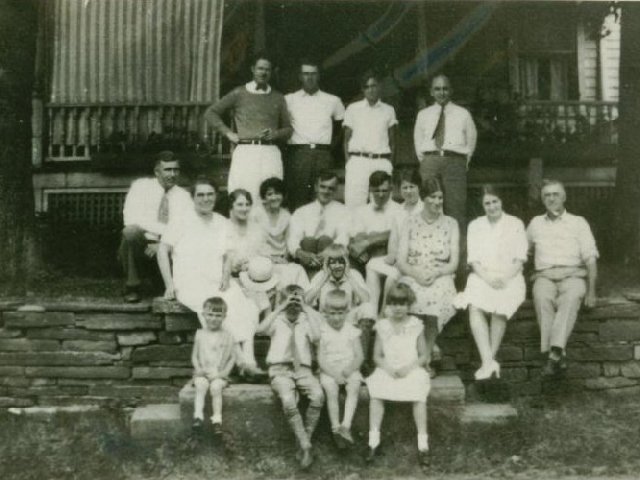 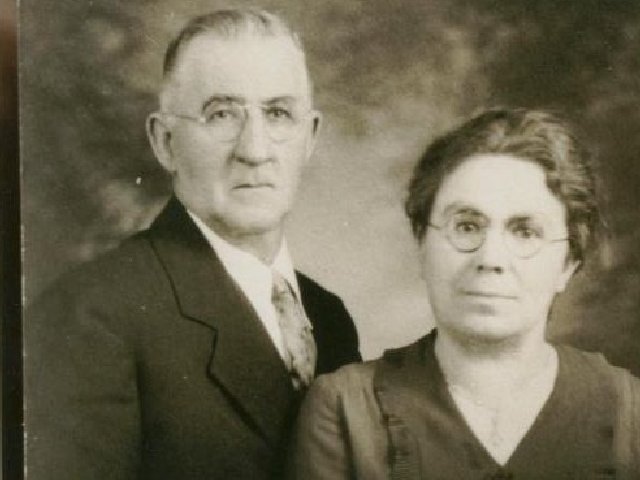 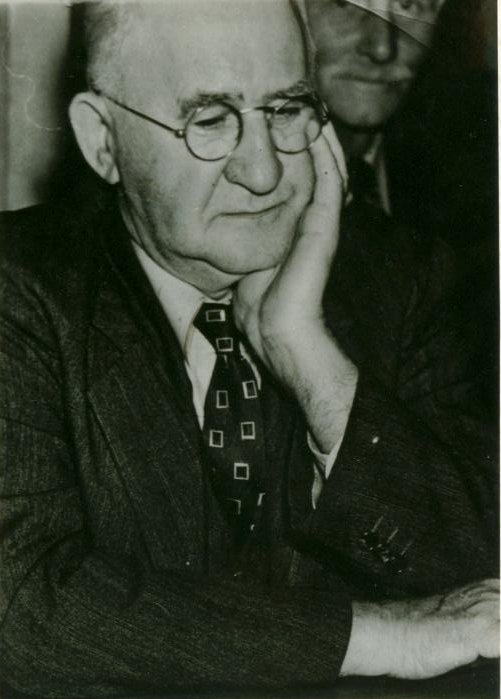 F.O. Dann. Doesn't someone have a story to go with this photo? 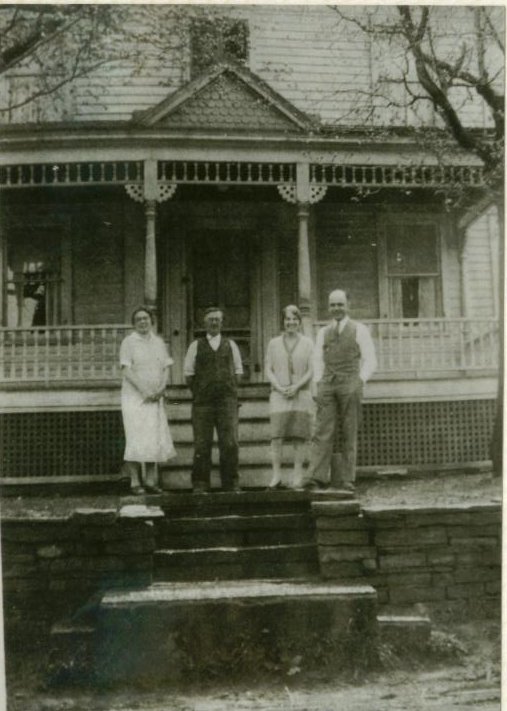 Mary and Fred Dann, Dorothy and Art Bullock. This picture was taken in front of the "halfway House"