This an excerpt of the 1873 map of the Town of Hornby, showing the southeast area of the town. I have added a few road names to make it easier for you to orient yourself, and I have also added printed lettering adjacent to the Dann and Van Hoesen properties to make them easier to locate. The sharp- eyed Dotte Hayes is the person who found this for us.

A.J Dann's farm is in the lower left, on the west side of West Hill Road. R.V. Van Hoesen's farm (?) Is just north of the hamlet of Hornby forks

This picture is an inset of Hornby Forks, showing the Van Hoesen house at the north end of town. 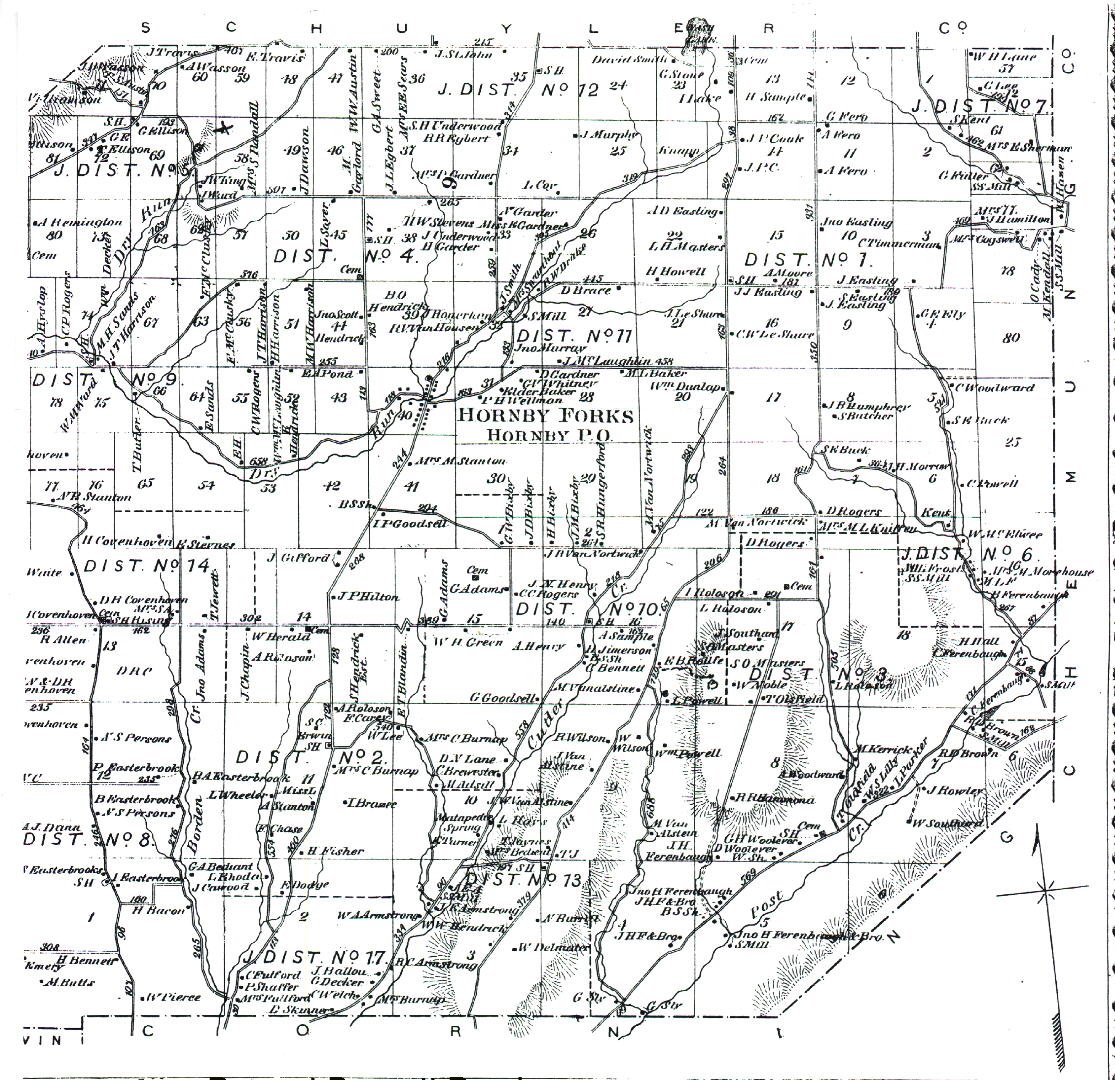 This is the complete (and un retouched) map of the township.

This is a Feb 2005 photograph of the site of the Van Hoesen house just north of Hornby Forks. Further research is warranted because EmmaLou Stanislaus, the Van Hoesen expert had no knowledge of a Van Hoesen home outside of the Forks. There is an impressive stone wall along this site, and the clear area in the center of the picture suggests a set of steps in the wall. There is a cellar hole just beyond. 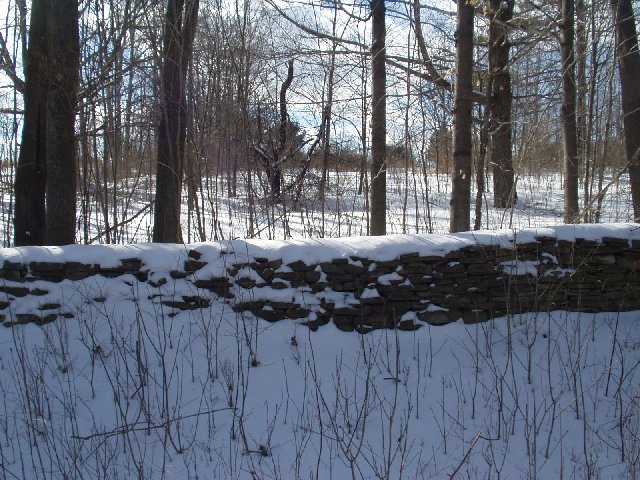 This is a Feb 2005 photograph of the site marked "AJ Dann on the Hornby map. Again, more research is warranted because of some conflicting stories. 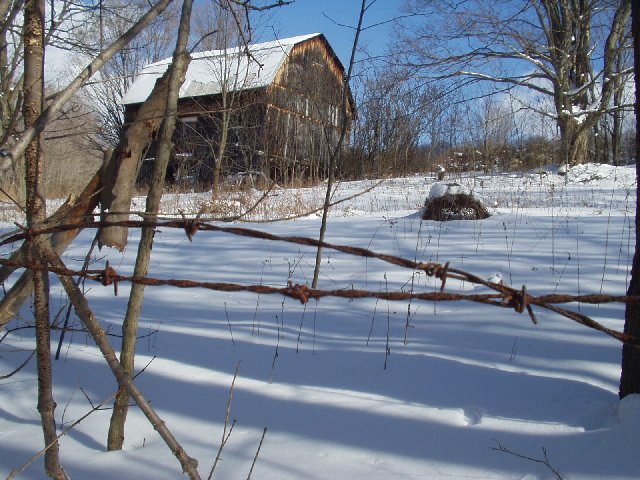 The only structure on the "M.Van Hoesen" property in Feb, 2005.
I can't resist sharing this tidbit from Emma Lou Stanislaus, the keeper of the Van Hoesen geneaolgy. On the Hornby map, just south of Hornby Forks is a property identified as "Mrs. M. Stanton". There aren't too many other "Mrs" on the map...

It turns out that this is Melissa Van Hoesen, Angelina's sister. She was the last of the three girls to marry, and Emma Lou wonders if there wasn't an element of desperation in it; Her husband was 10 years older than she was, and her folks didn't like him.

Their farm was bought with Van Hoesen money (apparently there was enough to go around) but the title to the property remained in Melissa's name, perhaps just for safe-keeping but perhaps as an ongoing message for their son- in- law.

Emma Lou writes: I was not aware RV was ever a farmer at Hornby but perhaps he did both, he had a shoe shop, repair and made shoes, was also a JP, the only house I know of they lived in was by the church up from the business area. The Eddy's lived in town too that was Helen VH, sister to Angeline. Their mercantile store was right on the Dry Run Creek. I don't suppose you can go back in and mark along the road the "M Stanton" for better reading. It is by # 244. This would be sister to Angeline too, my great grandmother. The money came from the VH side so their property was always in her name, in fact I may have told you this before but they did not particularly care for him plus he was 10 years older, my feeling is she was desperate and the last of the girls to marry. I have to admit she was the glue that held that family together. One of my favorite stories is one night they were to have revival and he promised to be home in time. He had a meeting of his old war buddies in the PM, well he was late, that in it's self she could have killed him, but he was a wee bit happy and he came prancing down the isle say " Bully for Jesus, Bully for Jesus" and he proceeds on down the aisle waving a five dollar bill in his hand and putting it in the plate !! Poor Grandma was aghast as that 5.00 would have bought supplies for a month and they were poor, the minister under usual circumstances would have booted him out but that money was really needed and a long time since he had seen that kind of money. As I understand it got quiet and Lord only knows what she did to him when they got home.

use your back button to return to the "Notes about A.J. Dann"
Notes about AJ Dann
Return to Website Home Page
E- mail Bob Tilden